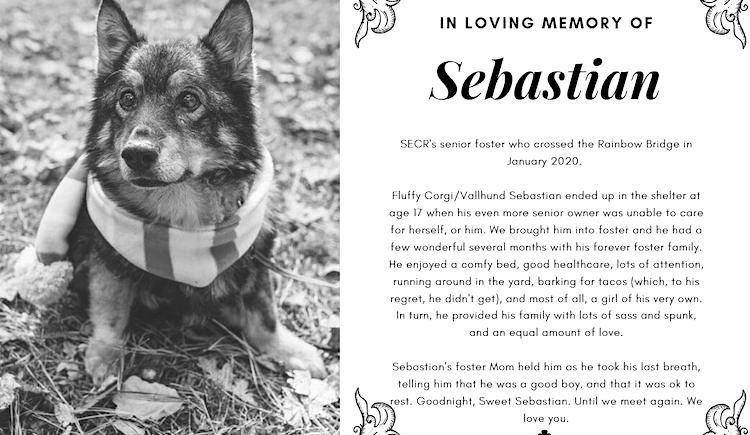 Update 1/2/20: We are heartbroken once again. We are saying goodbye to another lovely senior gentleman. Fluffy Corgi/Vallhund Sebastian ended up in the shelter at age 17 when his elderly owner was no longer able to care for herself, or him. We brought him into foster and he had several wonderful months with his forever foster family. He enjoyed a comfy bed, good healthcare, lots of attention, running around in the yard, barking for tacos (which, to his regret, he didn’t get), and most of all, a girl of his very own. In turn, he provided his family with lots of sass and spunk, and an equal amount of love.

Sebastian woke up yesterday with some diarrhea, fecal urgency, and panting. His foster rushed him to an emergency vet where he stayed overnight, undergoing a battery of tests. He remained uncomfortable at night, with panting and restlessness. This morning his bloodwork showed several electrolyte abnormalities, and an ultrasound showed abdominal lymphadenopathy, almost no blood flow through a large intraabdominal blood clot (major vessel) an enlarged pancreas, and a rectal mass. The vet told us that he was suffering, likely had metastatic cancer, and we needed to let him go. When his foster mom went to see him this am he could barely lift his head. She held him as he took his last breath, telling him that he was a good boy, and that it was ok to rest. Goodnight, Sweet Sebastian. Until we meet again. We love you.

Update 9/9/19: Our vet was pleased with how well Sebastian is doing for his age! His numbers were off in a couple of areas – pre kidney failure and pre anemic, but she feels optimistic that with a special diet and weight loss, Sebastian will be able to get close to the normal range. He does have significant arthritis and that is something we’ll be working on, to ease his discomfort and modify his world so that he can maximize movement. It’s been a busy day for this boy, so now it’s time to rest and relax!

This beautiful old soul was just surrendered to an NC shelter. His elderly mom was unable to care for him anymore – she was not able to even care for herself.  She couldn’t afford to have him put down so the shelter was his only option. The shelter is full, but they posted him, hoping that a rescue could help, and that maybe if he could shed some weight that maybe he might have a few quality months or even years left. We had to get him today to save him, so our volunteers sprang into action and he will soon be safe with us. We will update as we know more after his vet visit. We don’t think he’s had much care recently so hopefully he has no serious illnesses.

My Tweets
Join 1,798 other subscribers