Update 8/31:  Jarvis has come such a long way after being with his fosters for almost two weeks. He was very skittish and unsure when he first got to their house but has overcome many of his fears (the washer and dryer!) and now loves to get belly rubs. Jarvis also loves going for walks (he demands them, actually!) and playing with stuffed toys that have squeakers. Even though he is a very good, and smart boy, he does not know basic obedience commands, so we will be working on those with him in the coming weeks. His personality unfolds a little more each day! 🙂

Jarvis is in the house! This beautiful 6-year-old tri boy was miserable when his dad moved, and he now had a blended family with young children and other dogs. His dad has had Jarvis since he was a puppy. Jarvis has always been high strung, but with young kids and a larger dog, Jarvis is even more anxious and has nipped a child. His dad is heartbroken but wants to do what is best for Jarvis and also his family. He tried to make it work but Jarvis remained unhappy, so we were contacted. He really loves him and wants to make sure Jarvis ends up well. We will take care of you, sweet boy, and find you a family where you can relax. More info to come. 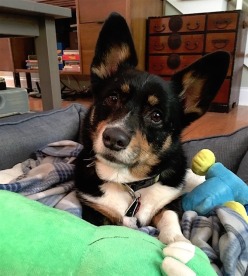 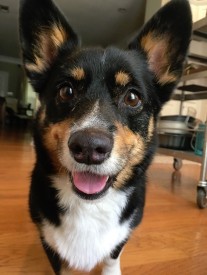